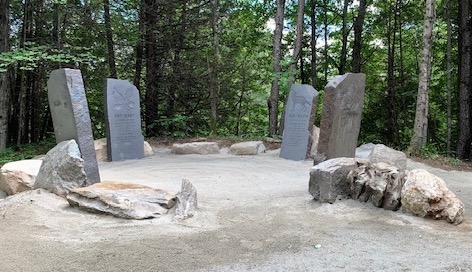 To learn more about the significance of the site and the ceremonial inauguration, Metis Algonquin – Anishnabe Elder Paul-Conrad Carignan will be on site to explain such details and share Drum songs on September 9th and 30th from 2pm until 3.30pm. Everyone is welcome. The nearest parking lot is at the Stanstead Road crossing, which is 1.0km north of the new site.

Sentiers Massawippi Inc, the owners of the Tomifobia Nature Trail is pleased to announce the opening of a new rest area along the trail. This unique new rest area, which opened on 14th August 2020, merits more than a simple  recharging of one’s battery! Situated at Km 16.8 (the distance southwards from the northern extremity of the trail at Ayer’s Cliff), the rest area is comprised of a circle of rocks, which includes four large engraved stelae at the North, South, East and West positions. The four stones respectively depict, a moose, coyote, eagle, and bear with writings that explain their significance in Indigenous  beliefs of Unity and Healing.

The circle also contains a wide variety of local natural stones which are geologically interesting and conveniently act as seats for the weary and inquisitive. These rocks simultaneously serve to complete the outline of a turtle – significant, since “Turtle Island” was the name for modern-day North America. The two distinctive stones behind the West (Bear) stone were selected to represent the turtle’s neck and head.

Origins of the Project
In March 2020, Sentiers Massawippi Inc. launched a competition for local artists to submit “Land Art” projects for embellishing the Tomifobia Nature Trail and from the five submissions, Paul-Conrad Carignan’s “Medicine Wheel and the 4 Directions” emerged the winner.

The main sponsor of the $11,000 project is the MRC Memphremagog through a Québec Government Ministry of Cultural Affairs grant. The municipality of Ogden and Sentiers Massawippi Inc. contributed the remainder of the funding in cash and kind.

Paul-Conrad Carignan, an Metis Algonquin – Anishnabe Elder who lives in the Eastern Townships, developed the theme of the project, with contributions from members of Sentiers Massawippi with the aim of combining an invitation for visitors to absorb the aboriginal teachings while resting their tired limbs. During construction, Mr. Carignan performed various ceremonies with a small group of witnesses, scattering sacred tobacco leaves at the bases of all four Directional Stones and conducting a special Chanupa-Sacred Pipe inauguration ceremony immediately after the last stone had been installed.

We hope you will enjoy this new rest area! 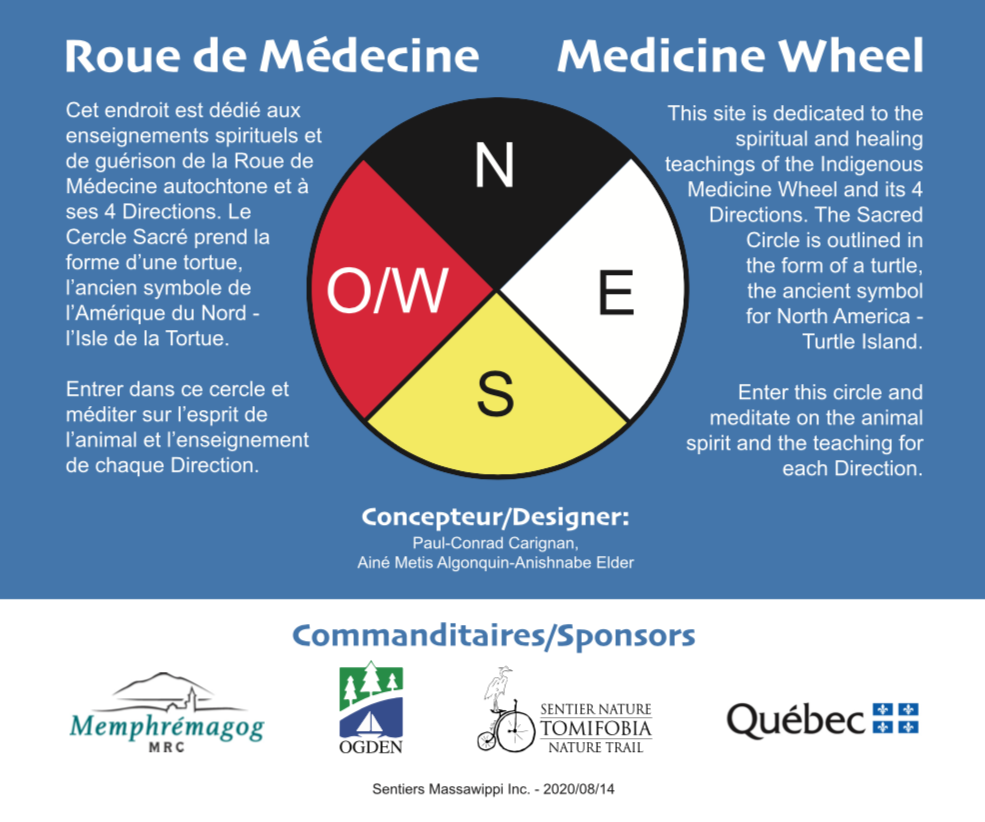